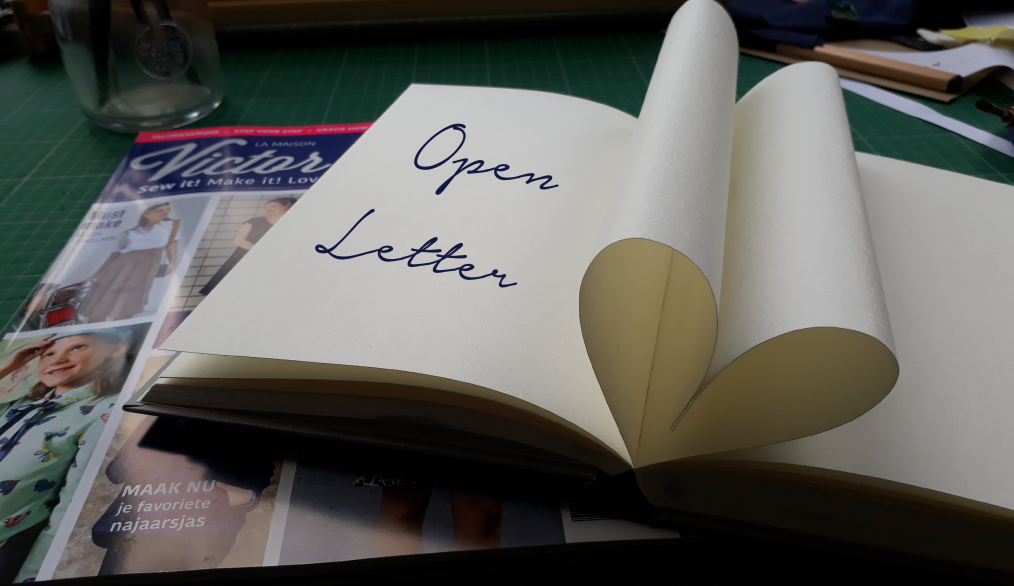 When I say an Open letter to La Maison Victor I mean it in two ways: Open, because it is for everyone to read, and Open because talking to other bloggers made me Open my eyes!

To the women behind La Maison Victor,

I have been really busy making a new pattern: the Pompi Pants. It is a very simple pants with a curved detail on the back. The word “pompi” is how little children in Mexico call the butt or booty. The pattern has been tested with an amazing group of (patient) ladies that have helped me a lot. I do it because I love designing clothes for my boys to wear. I am doing it all next to my day job and two little kids, so yes, it takes a very long time for me to go from idea to pattern in the shop. I am saying this because I designed the Pompi Pants during the Sew Naaiz Weekend back in February. There I made the first two test versions of the pants for my oldest son and I blogged about it here.

A little before a week ago I was super excited, cup of coffee ready to start diving into the beautiful pages of your magazine! I have always been a big fan! Then I could not believe my eyes when I saw the “Lou broekje”. I felt first very confused, then kind of angry, and finally actually a bit proud! If my favourite sewing magazine is copying me I must be doing something right! There you go! I said it. I assumed, somehow, that I was being copied. I imagined my Pompi Pants pasted on a mood board on the La Maison Victor office.

Without thinking too much about it I took a photo and shared it on the Minimi Instagram account.

Wow! Going through the new La Maison Victor and I bump into this! Looks a lot like my #pompipants only the detail is on the front… ?

I was careful enough not to say I thought I was being copied… but I implied it. And I am sorry! This is why:

This week a group of bloggers, including some of my sewing friends from the Sew Naaiz Weekend visited your offices and what I heard, opened my eyes. I thought your team was bigger! Then I learned you are just 7 very talented women, and actually doing everything yourselves, from photo shoots, to selecting fabrics, from designing, to actually sewing all the pieces, from writing the tutorials to booking cool photo shoot locations. I somehow thought of LMV and saw no faces, no people, just a very big magazine…

I learned as well that there is a lot of time between design and final print. That right now (September) you already have the designs that go for print by the end of December. So it is in deed very likely that this is just some (big) coincidence.

I also heard that all the criticism on social media gets to all of you personally. It does to all of us, only somehow its difficult to think of the faces behind a big, cool, successful magazine.

In the end, we are all a bunch of creative ladies trying to make cool things. I admire your work. Keep it up because I will continue to buy your magazine! Have always loved it!

So here an open call to all of us creative ladies! If you see a pattern that looks a little bit like another pattern just think twice before throwing each other dirt on social media. It is likely that an idea comes up in two places at the same time. Just think of the invention of calculus, television, telephones, bicycles, motion pictures, MRI imaging, and automobiles all involve various kinds of simultaneous, overlapping, or disputed origins. Not that I am comparing our pants (or any sewing pattern) to the invention of the television! 🙂