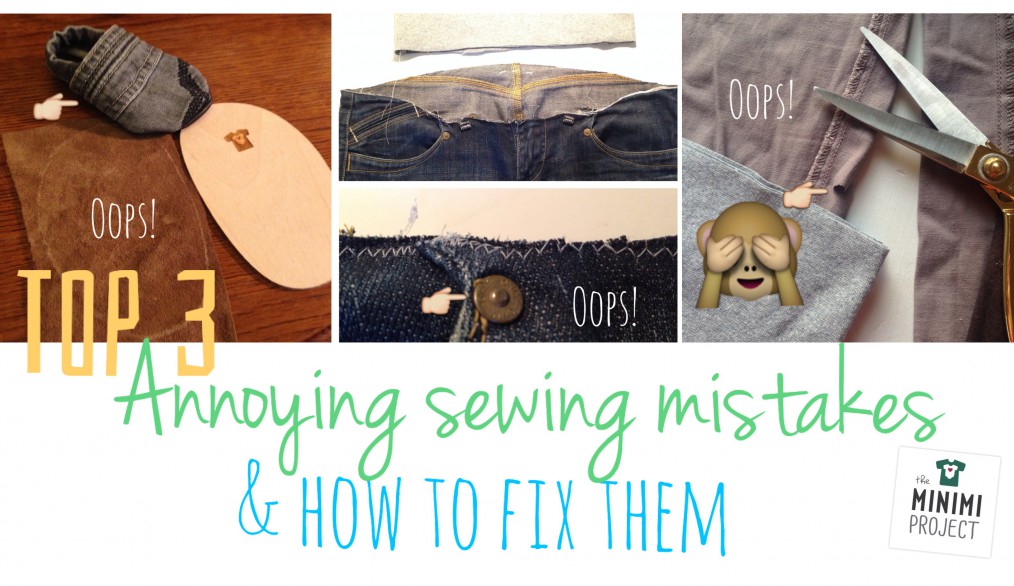 These are the most annoying & common sewing mistakes that have happened to me recently. I consider myself still a beginner in the world of sewing, but I believe the accidents in this list can happen to the most expert sewers out there, if they get distracted. You all know how it feels when you are happily sewing and then: OOPS!

If you are making mistakes it means you are out there doing something!

So without any shame, here I share my most common sewing mistakes, in order of annoyance!

Sewing mistake #1: Cutting into the fabric… or into other things…

While making maternity pants out of my own pants (read the tutorial here) I had an ugly incident with the scissors! I was cutting the waistband on top of the table and underneath were the pants. Knip; knip, knip, OOPS! I cut into the pants! I must admit it is not the first time it happens…

In this case it is always better to prevent than to fix… but I have to admit this has happened to me more than once. To be honest… I haven’t fixed it, is still in my to do list… But I think I will just buy an ironing patch and see if that works. Luckily, (or should I say): Unfortunately, I am not the only one. Michelle Leech from the sewing blog Sew n Sow had an incident with the rotary cutter. She cut through pattern pieces that were hiding under the fabric. She was lucky because it was not a finished piece that she cut through, she probably just taped the pattern back.

#thedailyseam Day 5 Ooops! At least it was only a pattern tracing hiding under there. #sewingbooboos #sewcialists @thedailyseam

Fooniks Tailor from the blog Needle for Thoughts was also a victim of this awful OOPS! But she fixed it by moving the seam lower so that the notch was in the seam allowance.

Day 5 of @thedailyseam march challenge. Today’s topic: Oops! The first thing that came to mind is throwback to when this happened when I was making my Reversible Hawthorn. It still makes me cringe every time I trim seams. But I am still happy I managed to fix it. Phew. #thedailyseam   A photo posted by Fooniks Tailor (@needleforthoughts) on Mar 5, 2015 at 8:38am PST

Forgetting to mirror the pattern while tracing and cutting can happen out of distraction. I was making baby shoes out of jeans pockets and I forgot to mirror the sole piece, so I ended up with two left shoes.

This sewing mistake can happen also while cutting sleeves and pants pipes. But mostly if you are working with fabrics you would cut the two pieces at once with the fabric good-sides together, then you are safe.

I had to break the seams and cut out a new sole piece, but I could reuse the jeans pockets because that pattern piece is symmetric. I was turning my jeans into maternity jeans like explained on this tutorial. While sewing the elastic band to the rest of the jeans, I broke not 1 but 2 needles! Only after changing the needle twice I discovered there was this little evil metal rivet hiding under the elastic band.

When a needle breaks, there is no way to fix it. Just make sure you have more needles so you can change them. But also, if you will work with heavy fabrics you need to go slowly and make sure you have a leather needle or one that can take the stress. Also look at the specifications of your machine.

I broke a needle (twice) because I missed this tiny metal rivet while turning my jeans into #maternity jeans! #thedailyseam #oops #photochallenge Working on a blog post about common sewing mistakes. What is the most annoying sewing #fail you have made?

Again, I am not the only one who has broken a needle or two… or four. Jana runs a blog called Jeve about sewing and interior design, also broke several needles while working on some heavy fabrics. She will open an e-shop soon where she will sell beautiful repurposed bags. Worth having a look.

But mostly I believe the biggest mistake is not trying and not daring! So feel proud if you are making mistakes, it means you are out there doing something!